The Tragedy of Donald J. Trump

Michael Flynn, (Ed.note: President Trump has made it absolutely clear to every federal official that he will fire anybody who follows the law when it conflicts with his personal will. He fired FBI Director James Comey for investigating national security adviser Michael Flynn’s illegal conduct.) along with ex-CIA psyop-master Steve Pieczenik, and ex-CIA operative Robert David Steele (of the phony “international tribunals”) saw and opportunity and ran with it. These are quislings who knew exactly what they were doing. I do think General McInerney is simply a doddering old fool that has no idea where this madness came from.

But what about Mary Fanning? She may not be aware of the origins the hoax that she is repeating — or she may be willfully ignorant and part of the scheme itself to overthrow the US government and turn it into a Bolshevik dictatorship. Only she knows what motivates her evil declarations.

Does Mary believe the world is run by lizard people as well? Does she really believe in the nonsense about Trump being reinstalled as president on March 4th? Hasn’t there been enough unproven outlandishness coming from the “Q” crowd, about things that never come true? Does Fanning ignore Israel’s part in all of this ’spying’ since they just about invented the craft?

There is “no evidence to support QAnon claims of mass arrests, military takeover, illegitimacy of Biden’s presidency or Trump’s return to power” on March 4 or any other day.

At a December 12 “MAGA” rally, white supremacist Nick Fuentes declared that his intent was to destroy the GOP. And that is indeed what seems to be the plan. Thus the chaos caused by Trump as a major catalyst anduseful idiot of the Russians — even an asset — as described by his KGB handler in the book “American Kompromat” by reporter Craig Unger. Another book, “Trump/Russia – A Definitive History” by Seth Hettena, outlines his involvement with the Russian oligarchy, Russian crime rings, money laundering on their behalf, and his relationship with his employee in Russia Felix Sater whom he has denied even knowing. His ties to Russia are deep, real, and disturbing.

Top funders and organizers of the January 6 rally were heiress to the Publix Super Markets chain, Alex Jones, and a character named Ali Alexander creator of the “Stop the Steal” movement, and of course aided and abetted by Trump’s rhetoric over a period of time preceding and up to the rally. Alexander is still plotting violence as we speak, even as the “Q” theory is falling apart and the “Q” movement has lost credibility within its ranks.

Others are ready to capitalize on the disarray within the “Q” movement.

“Other fringe groups, including neo-Nazis, said they intended to capitalize on the disarray by stepping up recruitment from among QAnon followers.”

And so contrary to the LARP, there WAS no plan, NO army, and NO coup except for the 3 groups which came together to storm the capitol building after months of plotting violence on social media sites such as Parler, Tik Tok, Twitter, and Facebook. Some even tried to blame ANTIFA.

These groups consisted of religious nuts who fantasize that Trump was sent by God, wayward militia who are paranoid about guns, and other groups such as the racist “Proud Boys” who thought Trump was going to round up minorities like this writer and execute us once elected. (This writer was threatened regularly with deportation and death in 2015-2016).

“The FBI has linked at least 40 defendants to extremist groups or movements, including at least 16 members or associates of the neo-fascist Proud Boys and at least five connected to the anti-government Oath Keepers. FBI agents also explicitly tied at least 10 defendants to QAnon, a pro-Trump conspiracy theory that has grown beyond its fringe origins to penetrate mainstream Republican politics.”

The result was that Trumpers, some who never even voted for the guy in the 2020 election, are being arrested by the FBI. After admitting they did what they did on his behalf and at his behest, they are quickly find out that Trump doesn’t care about them or have any remorse for the 7 people who died during, or in the aftermath of the siege on the Capitol building. We saw him watch with glee as it happened.

“According to staffers for the former President, Trump has shown absolutely ZERO remorse for the insurrection and the attacks on Mike Pence from his supporters. Pence is still in a bit of disbelief, according to his aides, over Trump’s behavior, but everyone knows that if you try to play nice with Trump he will eventually turn on you.” – VIDEO

For conservatives or Republicans to continue to claim it was not Trumpers incited by Trump who were the ones that rioted, or that his followers were not responsible, is not only absurd but despicable and dangerous.

Since January 6, 140,000 Republican voters have left the party. It would seem that the goal of destroying the GOP is already well on its way to being met.

Other Republicans, especially the 43 cowards who voted to acquit, are glorifying and praising Trump as someone needed in the party rather than someone to be shunned and disavowed. Flowery tributes containing undue praise for Trump, posted by Trump sycophants and media mouthpieces are appalling and sickening. In reality, Trump raised taxes on seniors, raised the national debt by trillions, funded the Planned Parenthood and Climate agendas to the fullest, passed the disastrous USMCA which helps hand us over to global governance, praised a North Korean dictator right after that dictator had murdered an American child, and pandered to terrorist governments Israel and Saudi Arabia. We will never forget the damage that was done regarding Trump’s policies on Jerusalem, the nuclear deal, the Golan Heights, and the assassination of Soleimani.

How does Donald J. Trump not get arrested and charged with treason after inciting an insurrection where rioters were hunting down legislators in order to kill them, including the intent to hang Mike Pence, Trumps own Vice President, from a gallows they’d erected?

It is hoped that Trump will somehow be held accountable for his crimes.

He cannot escape private lawsuits and the states of NY and GA are investigating him for tax evasion, money laundering, sex crimes and election tampering.

“A Democratic congressman has accused Donald Trump and his personal lawyer Rudy Giuliani of conspiring and inciting the deadly insurrection on the US Capitol on 6 January, in a federal lawsuit filed on Tuesday. Bennie Thompson, a Democrat and chairman of the House Homeland Security Committee, filed the suit in a federal court in Washington DC under a Reconstruction-era law known as the Ku Klux Klan Act, according to the Associated Press.“

People who continue to support and praise Trump by making excuses for him as if he did nothing wrong are no better than the feces his followers smeared on the walls of the building that day.

Both Trump and his supporters have been using the stolen election hoax and “Q” nonsense to steal money from duped believers. Opportunists like Steele, Flynn, Pieczenik, Powell, Lindell, and Fanning, as well as lesser-known social media personalities must be scared that the biggest grift in history is coming to an end as they persist in promoting their wild theories.

And if America doesn’t stop Trump now, what unthinkable things is the man who bragged he could “shoot someone in the middle of 5th avenue and not lose support” capable of doing in the future? 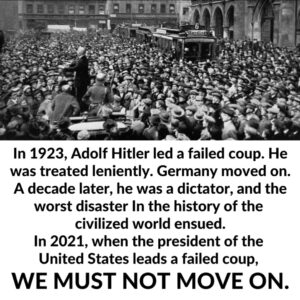