This has all been done to further the national political career prospects of the elite and extend a political dynasty. The evidence is overwhelming, the long term destruction is devastating, and the time to address the issue is now.

I have provided an initial overview in this article and will be sharing substantial additional material over the weeks to come. Medicaid expansion must be stopped. New Hampshire’s reliance on federal Medicaid money for our general fund needs to be halted, and the politicians who have deceived us for decades need to be outed and stripped of their “fiscal conservative” title.

A Fake Fiscal Conservative is Born

New Hampshire, the “Live Free or Die” state, prides itself on having no sales or income tax. For decades, New Hampshire Republican leaders on the national stage have positioned themselves as being the fiscally conservative, adults in the room. It turns out to be an act. Since 1991, New Hampshire has been using substantial amounts of money from a federal Medicaid matching program to avoid making hard fiscal decisions all while being able to still avoid having a sales or income tax.

New Hampshire was doing quite well until the tech boom came to an end in 1989. By 1991, the state was facing a $35 million budget deficit. Rather than cut spending, address unfunded pensions, or take any steps to structurally fix the problem, they found a loophole.

“A Democratic HECC aide suggests that in 1991 President Bush and his Chief of Staff, former New Hampshire Governor John Sununu, intervened on New Hampshire’s behalf to gain HCFA approval for the most extensive special financing program among all the states.”

Here’s how it works: 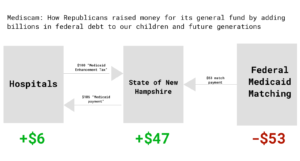 During 1991 and 1992, this scam was used to collect an additional $407 million from Medicaid on top of the normal amount collected.

Even lawmakers that were behind the plan at the time of passage, now realize the long term implications, According to a Washington Post article from 1993:

“It was a scam, no question about it,” said Douglas E. Hall, a Republican state legislator who helped devise the scheme in 1991 but now feels it enabled New Hampshire to postpone dealing with its underlying fiscal problems. “We’re funding our state judicial system, our highway program and everything else out of a Medicaid loophole, which is being funded out of the {federal} deficit.”

“We used it to balance our budget,” says state Rep. Donna P. Sytek, former chairman of the House Ways and Means Committee. “Probably it wasn’t in the spirit of the law. But it was in the letter.”

Other states quickly followed New Hampshire. As you can see from this HHS graph, the overall cost of Medicaid nationally has surged since 1990, with Mediscam being a major driver. 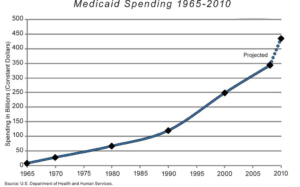 What is even more unbelievable is that Judd Gregg leveraged this scam to get elected 3-times to the United State Senate while branding himself as a self-described “skinflint” who was “going to stand up and be counted on the basis of fiscal conservatism.”

We have allowed the “fiscal conservative” label to be used by Gregg and many of the others that have followed (Merrill, Benson, John E. Sununu, and Chris Sununu). In reality, they abandoned fiscal responsibility and handed the bill to our children and future generations through massive federal debt and unfunded entitlement liabilities.

For Gregg, the skullduggery didn’t stop with the Medicaid scam. Here are some of his other epic failures:

– Was a key player in pushing through the $700 billion TARP bailout program for the bankers.
– Almost accepted a job as Commerce Secretary under President Obama.
– Became an advisor to Goldman Sachs after pushing through major bank bailout.

Even more outrageous, Gregg has relatively recently written articles on various financial topics and positions himself as “the adult in the room” when people suggest ideas like auditing the fed.

From Mediscam to TARP, the biggest fear Gregg should have is an audit of his own reckless behavior and the carnage he has left behind for future generations.

The Gang’s All Here

Now let’s fast forward to 2013. New Hampshire was faced with the decision as to whether or not to expand Medicaid under Obamacare. It turns out that John H. Sununu and some of the original team that was involved in the special financing scheme colluded on New Hampshire’s Obamacare Medicaid expansion program.

During Senate President Chuck Morse’s 2013 Libertas Awards speech he mentions the fact that Tom Scully (former advisor to George H. W. Bush) was a consultant on this project. Scully worked with John H. Sununu (presumably on securing the special financing arrangement now known as Mediscam) and was the architect of the multi-trillion dollar Medicare Part D boondoggle (that Jeb Bradley co-sponsored when he was a US Congressman). It was Scully, according to Morse, who suggested using federal Medicaid dollars to fund private insurance and then have the insurers pay a tax to offset the reduction in reimbursements from the federal government.

Many others offered advice to Morse and Bradley. Yet, they chose their trusted crony. Upon further examination of his background, if you want a new Medicaid shell game, he’s the perfect guy with whom to consult.

– According to an internal investigation by the Department of Health and Human Services, Scully took part in efforts to intentionally withhold cost estimates of the Medicare prescription drug benefit from Congress while it was being considered for passage. A report by the Government Accountability Office on the investigation said that Scully threatened to fire Medicare’s chief actuary, Richard Foster, if he provided the data to Congress and recommended that HHS seek to recover Scully’s salary due to this infraction.

– A subsequent report by the Congressional Research Service concluded that Scully and the Bush administration broke federal law by telling Foster to withhold information from Congress because Congress’ “right to receive truthful information from federal agencies to assist in its legislative functions is clear and unassailable.”

Ultimately, the Republican-led Senate passed Obamacare Medicaid expansion in the State of New Hampshire (despite substantial opposition by the overwhelming majority of Republicans throughout the state). At the time, Jeb Bradley stated that he was sure he could obtain waivers from Health and Human Services (HHS) to protect the taxpayers from any additional cost from this program. Initially, the federal government would reimburse 100% of the costs of the expansion. That percentage would be reduced over time to 90%. The new scheme that the Bradley, Scully, Sununu team came up with works as follows:

– In most states Medicaid reimbursements are made directly by the state. Under Bradley’s model, instead of Medicaid managing the disbursements, the expanded Medicaid money will go to private insurers who will administer the program.

– Hospitals and Insurers will pay a tax to make up the difference not being paid by the federal government.

While it is true that the federal government technically isn’t picking up the tab, this is another ruse. It is obvious that the hospitals and insurers are simply going to pass on the added costs to the consumers.

Bradley’s deception was detected. The Trump administration ruled that their provider-funded model is against the law. We are now at risk of losing all of our expanded Medicaid money:

“CMS Medicaid Director Brian Neale informed N.H. Health and Human Services Commissioner Jeffrey Meyers in a July 25 letter that provider donations are not allowed under federal law “except in very limited circumstances” and not the way New Hampshire uses them.

Medicaid expansion goes out of existence in the state at the end of 2018 unless lawmakers reauthorize it.”

Jeb Bradley was first elected to the New Hampshire state house in 1990. His political career has been bookended by these entitlement scams. Jeb can’t quit, the entire house of cards would collapse. Like many other politicians, he picked the crisis de jure for his next trick.

New Hampshire has one of the worst opioid problems in the country. Despite evidence that shows that the death rate from opioid overdoses has increased more in states that have expanded Medicaid and that there is no evidence linking more expanded Medicaid to opioid treatment success, Jeb didn’t want to waste the virtue signaling PR potential of using the opioid crisis to protect our general fund.

Remember, this isn’t about the opioid crisis, and it’s not even about Medicaid. It is about funding part of New Hampshire’s budget using federal Medicaid money. If this program goes away, New Hampshire will be faced with the consequences of 27 years of poor financial management built on an unsound financing scheme.

It gets even worse. Remember, we can’t use taxes on insurers or hospitals to cover the gap not reimbursed by the federal government. Bradley’s solution is to use money from the state monopoly-run liquor stores to fund that gap.

“The plan would claim 5 percent of state liquor-sale profits to serve as a taxpayer match for the New Hampshire Granite Care Advantage Health Care Program.”

1. Led by Republicans, for 27 years, New Hampshire has been funding part of its General Fund (not for healthcare) using Federal Medicaid matching funds.

2. These federal funds have added billions of dollars to the debt and unfunded entitlement liabilities. These massive costs will be paid for by our children and future generations.

3. Republicans wanted to further the scam by participating in Obamacare Medicaid expansion. They deceived the taxpayers by coming up with a scheme that was later determined to be illegal under federal law. It uses taxes on hospitals and insurers to make up for the fact that the federal government was dropping its 100% reimbursement rate to 90% over time.

4. New Hampshire has one of the worst opioid problems in the country. Despite the fact that the evidence shows that states with expanded Medicaid have shown greater increases in opioid death rates after expanding medicaid, Jeb Bradley has deceptively used the crisis as a justification to push for the expansion. He is proposing using a sales tax from New Hampshire’s state liquor store monopoly to replace the illegal tax on healthcare providers.

In short, we are using money from one addiction (alcohol) to fund unproven treatment for another addiction (opioids) all to expand a federal entitlement (Medicaid) so that we can use the money from that match to pay for our non-healthcare related New Hampshire state budget and cover-up 27 years of fiscal irresponsibility.

Our real addiction seems to be to fiscal irresponsibility.